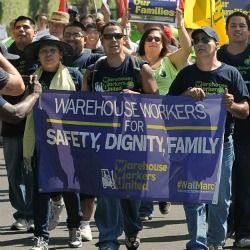 Four years after Domingo Blancas’ brush with death on the job, the California Occupational Safety and Health Appeals Board (Board) has upheld citations issued to his employers for failing to have an effective IIPP (Injury and Illness Prevention Program) that addressed the hazard of indoor heat.

Worksafe – along with Alexander Community Law Center at SCU, and Warehouse Worker Resource Center – represented Domingo before the Board, and together we succeeded in getting justice for him and all the other workers exposed to this preventable hazard.

Domingo worked in an Inland Empire warehouse that serves retail giants such as Walmart. He was employed by a temporary staffing agency, Tri-State Staffing (TSI), and hired to work for the warehouse operator, National Distribution Center (NDC).

In August 2011, Domingo suffered heat illness while working inside a metal freight container with a temperature around 110 degrees. He felt ill and reported this; first, to his warehouse supervisor, and then to the temp agency supervisor.

Neither provided him with any assistance or care. He ultimately had to transport himself to the hospital, where he was diagnosed with heat stroke and hospitalized for three days.

Cal/OSHA then investigated a complaint by the workers and issued citations to both employers for failing to have an effective IIPP that addressed the hazard of indoor heat. Unsurprisingly, the employers appealed the citations. And, in early 2015, after years of multiple hearings before the Board, the judge finally issued her decision in favor of the employers.

Cal/OSHA’s legal team held firm and filed a petition for reconsideration with the Board. Worksafe filed a supporting brief.

This week, the Board overturned the judge’s decision, concluding that both employers violated the law by failing to have an effective IIPP addressing indoor heat.* Domingo’s case provided evidence of the heat illness hazard, which was critical to support the workers’ Cal/OSHA complaint.

This decision reinforces multi-employer responsibility for ensuring compliance with all Cal/OSHA standards. It also reinforces inspectors’ ability to use the IIPP requirement that employers fix known hazards at their workplace when there is no specific standard.

Many people contributed time and resources to this fight, including the dedicated enforcement team from Cal/OSHA who conducted the investigations, and the tenacious legal team who fought to ensure that the citation was upheld. Thank you to everyone who supported this fight for workers in warehousing and every other industry where people face the potentially fatal risk of heat illness.